On 19 July 2019 , a WestJet Encore De Havilland DHC-8-402 (registration C-FKWE) was operating as flight WEN3362 from Fort McMurray (CYMM), Alberta, to Edmonton (CYEG), Alberta, with 4 crew members and 70 passengers onboard. While landing on Runway 12, the aircraft made abnormal contact with the runway. After clearing the runway and while on Taxiway A2, the flight crew became aware that the nose tires had burst. Due to thunderstorm activity, company maintenance personnel had to wait for approximately 40 minutes before they could change the two nose tires. After deplaning passengers at the gate, a more detailed inspection of the aircraft revealed wrinkled fuselage skins, damage to the left nose gear door, damage to the forward pressure bulkhead, and damage to the nose gear assembly. There were no reported injuries to the crew or passengers. 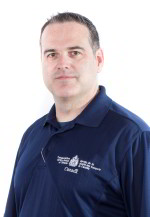 Wade Fontaine is a Senior Regional Investigator – Operations with the Western Region of the Air Investigations Branch. He joined the TSB in 2019 following 25 years of diverse work experience in law enforcement, naval operations, Air Force flight safety, and aviation consultation.

Since departing the military in 2011, he has provided contract pilot and safety services for airline and corporate flight departments, and has been involved in domestic and international aviation safety instruction.