Update: The TSB has completed this investigation. The report was published on 12 July 2017.

On 09 November 2015, a privately registered Cessna 182H (registration C-GKNZ, serial number 182-56161) with 1 pilot and 1 passenger on board, departed from the Parry Sound Area Municipal Airport, Ontario, at 1917 Eastern Standard Time under night visual flight rules for a flight to Tillsonburg Airport, Ontario. Once airborne, the aircraft immediately started a right climbing turn for approximately 90° of heading, and then continued its turn for an additional 180° while descending before colliding with the terrain. The aircraft clipped trees in a nose-down attitude with a significant angle of bank to the right before striking the ground on a rocky downward slope. The 2 occupants were fatally injured and a post-impact fire destroyed most of the aircraft. The aircraft was equipped with an emergency locator transmitter, but it was not activated by impact forces. The accident occurred during the hours of darkness.

TSB deploys a team of investigators to the site of an aircraft accident near the Parry Sound airport, Ontario

The Transportation Safety Board of Canada (TSB) is deploying a team of investigators to the site of an accident involving a Cessna 182 near the Parry Sound airport, Ontario. The TSB will gather information and assess the occurrence. 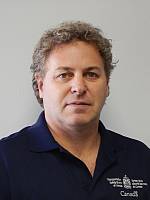 Mario Boulet has over 30 years of civil aviation experience. He joined the TSB in 2015 and is now a Regional Senior Investigator based out of Dorval, Quebec.

Before joining the TSB, Mr. Boulet worked during 8 years for Transport Canada as a civil aviation safety inspector after a career in the private sector for various approved maintenance organizations, aircraft manufacturers and airlines where he occupied positions from aircraft maintenance engineer to Person Responsible for Maintenance (PRM), including Minister Delegate for a major aircraft manufacturer.

Since 2006, Mr. Boulet also became an expert in the manufacturing and operation of Unmanned Aerial Systems (UAS).